3D printers are now cheaper to produce, and experts predict they will soon become popular in our homes.Even today, more companies are aware of the potential of 3d printing apps in their own businesses.Since the technology moved from theory to reality, people have expanded the range of printing, from very practical manufacturing and medical devices to just entertainment.Here are some amazing real-world examples of 3D printing in 2018.

Prosthetic limbs and other body parts

Vets have made 3D printed masks to help dogs recover from severe facial injuries, they've made surgical guidelines, prosthetics and models of body parts, and 3D printing has had a huge impact on medical strategy.

Homes and other buildings

In less than 24 hours, a 400-square-foot house was built on the outskirts of Moscow using 3D printing.The possibility of using 3D printing to quickly build homes and other structures is interesting when the timing is critical, such as building emergency shelters for disaster-hit areas after natural disasters.

When you think about traditional cake decorating techniques—pushing frosting through a tip to create designs—it’s very similar to the 3D printing application process where material is pushed through a needle and formed one layer at a time. Just as it’s done with 3D plastic printing, a chocolate 3D printer starts with a digital design that is sliced by a computer program to create layers; then the object will be created layer by layer.

Defense Distributed was the first to create a 3D-printed firearm in 2013 called the Liberator. While there are 3D printers that can use metal, they are very expensive, so the Liberator was printed using plastic.

There are many applications across several industries including automotive, aerospace and more for 3D printing in manufacturing from printing replacement parts of machinery and prototyping new products (with the added benefit of recycling the models after you’re done) to creating molds and jigs to improve the efficiency of the production process.

From an incredible 3Dvarius, inspired by a Stradivarius violin, to flutes and banjos, several musical instruments and parts of instruments such as mouthpieces have been created using a 3D printer.

Anything your mind can imagine

What's remarkable about 3D printing is that it can be used to create anything you can think of.It just needs digital files and the right material. 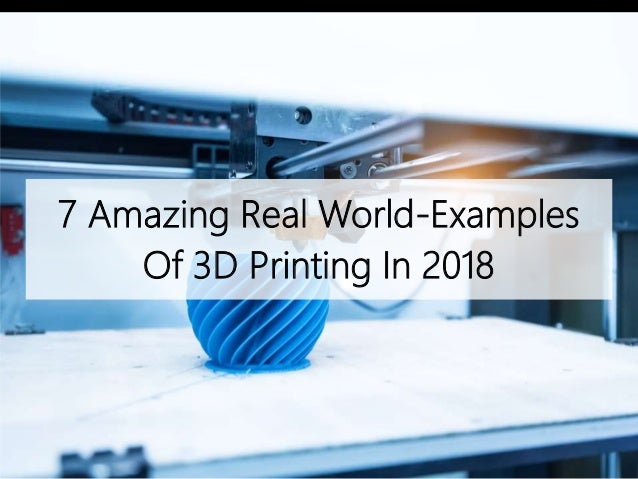