Loveland-based 3D printer manufacturer Aleph Objects announced Wednesday that it had teamed up with a company in a collaboration that eventually could lead to 3D printing of human organs.

Aleph teamed up with FluidForm in Massachusetts to modify the LulzBot Mini 2 desktop printer to enable 3D printing of liquids including human tissue building blocks during bioprinting.

"We won't see people's bioprinted hearts in three to four years; it's still a fantasy," FluidForm CEO Mike Grafi said in a telephone interview on Wednesday. But he said that this may develop in the future.

The technology of 3D printing involves a highly accurate print head laying down layer after layer of material, usually a plastic, to create something. In bioprinting, the print head is replaced by a syringe with a needle that deposits layers of what is called “bioink.”

Graffeo explained that the human body is made up of two main things besides water: “cells and the stuff that keeps the cells in place — the extracellular matrix.”

This matrix is “the scaffold around the cells that holds them where they belong,” he said.

With substances such as collagen, FluidForm 3D-prints biological scaffolds using its FRESH technique, which stands for Freeform Reversible Embedding of Suspended Hydrogels.

On these scaffolds, stem cells can be applied that will regenerate into tissues to help heal wounds and rebuild joints, and much more.

“That’s really hard to do because collagen is a liquid in a syringe,” Graffeo said, so if applied to a surface, “it would be a puddle.”

That’s where a breakthrough material from FluidForm comes in. Called LifeSupport, the gel-like material is placed in a petri dish, and the printer’s needle creates a three-dimensional structure in the gel. The medium holds up the bioink as it’s laid down into the appropriate shape.

When the LifeSupport gel is warmed, it melts away, leaving the 3D bioprinted structure.

“At that lab for a long time, they had been converting standard, off-the-shelf 3D printers into bioprinters,” Graffeo said. One of the brands was the Loveland-made LulzBot.

“The LulzBot systems are great in terms of reliability, they work really well, and they’re plenty accurate for what we want to do,” he said.

So last year, FluidForm started talking with Aleph Objects, and the result is the LulzBot Bio, which will be available for purchase this summer, according to a press release from Aleph.

Engineers in Loveland designed a needle extruder for their Mini 2 printer and optimized the machine in other ways, Moe said. 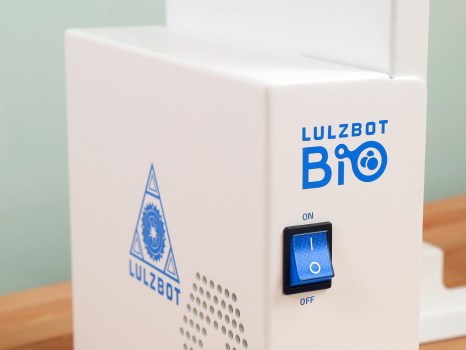