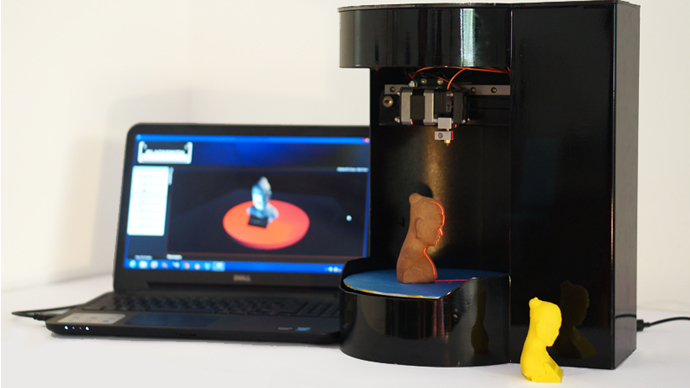 The world's first compact 3D printer-cum-scanner that can also scan items has been unveiled at the American Association Advancement of Science (AAAS) annual meeting in San Jose, California.

The 2,200-U.S.-dollar device allows users to scan any item, and then edit the digitized model on the computer and print it out in 3D, Lester Kok, assistant manager of NTU's Corporate Communications Office, told Xinhua on Sunday.

"Most 3D printers sold on the market now are not really user-friendly as their 3D models and blueprints usually have to be designed from scratch on the computer," Kok said, "but Blacksmith Genesis doesn't require much knowledge of 3D software."

Unlike other commercial 3D printers, Blacksmith Genesis uses an innovative rotary platform for its printing and scanning. This patent-pending revolving platform allows for true 360-degrees scanning, and can print items up to 6,650 cm3, twice the size of those printed by other similar-sized 3D printers in the market.

With a fine resolution of 50 micrometers, the reproductions will be twice as detailed compared to other compact 3D printers. Likewise, scanning of objects with its 5 megapixel camera takes only 6 minutes, twice as fast as other 3D scanners in the market.

Another unique feature of Blacksmith Genesis is its remote live monitoring and automatic error detection using an in-built camera. Users can also monitor the printing process on their smartphone from anywhere in the world through an Internet connection, and will be able to start or stop printing at any time.

"While low-cost 3D printers are accessible to the public, they are still very hard to program and assemble. Having an affordable, high-quality 3D printer that is easy to use is what the market is missing and this is where Blacksmith Group will bridge the gap," Prof Chua Chee Kai, the mentor for the Blacksmith Group, said in a press release.

The 3D printer-cum-scanner was created in Singapore with the help of a crowdfunding campaign, raising over 80,000 U.S.dollars, and its U.S. supporters will be able to get it as early as March.